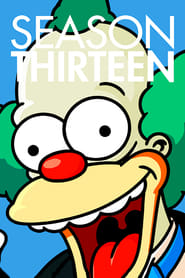 The Simpsons’ thirteenth season originally aired on the Fox network between November 6, 2001 and May 22, 2002 and consists of 22 episodes. The show runner for the thirteenth production season was Al Jean who executive-produced 17 episodes. Mike Scully executive-produced the remaining five, which were all hold-overs that were produced for the previous season. The Simpsons is an animated series about a working-class family, which consists of Homer, Marge, Bart, Lisa, and Maggie. The show is set in the fictional city of Springfield, and lampoons American culture, society, television and many aspects of the human condition. The season won an Annie Award for Best Animated Television Production, and was nominated for several other awards, including two Primetime Emmy Awards, three Writers Guild of America Awards, and an Environmental Media Award. The Simpsons ranked 30th in the season ratings with an average viewership of 12.4 million viewers. It was the second highest rated show on Fox after Malcolm in the Middle. The DVD boxset was released in the United States and Canada on August 24, 2010, eight years after it had completed broadcast on television.