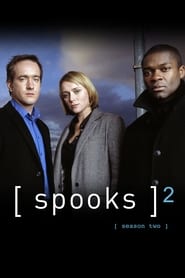 The second series gets off to an explosive start, picking up at the exact moment the first one finished. MI5 agent Tom’s girlfriend Ellie and her young daughter are trapped inside a securely sealed house in which a bomb is about to explode, and there’s no way out. There’s also organised crime, terrorist activities, embassy sieges, weapons proliferation, subversives, anarchists and drug traffickers, not to mention the conflicts and power struggles the elite team has to deal with back in the office.