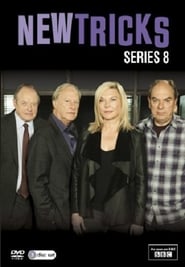 Brian Lane, Jack Halford and Gerry Standing may be eccentric, ignore procedure, bend the rules and take risks, but they get results. Series 8 sees them opening the files on the death of a senior palaeontologist at the Natural History Musuem, the hit and run of a cycle courier, the murder of a vagrant on a tube train, a missing scientist who disappeared on the London to Paris Eurostar and the murder of the leader of a notorious criminal biker gang. Among the guest stars appearing in the series are Sheila Hancock, Keith Allen, Peter Davison, Tim McInnerny, Rebecca Front, Sally Phillips, Paul McGann, Shaun Williamson and Emily Glenister. The team also face their own personal dilemmas with Brian suspecting wife Esther of having an affair, Sandra questioning her role at UCOS, Jack struggling to deal with his own emotions during the hit and run case and Gerry back on the dating scene -older, but not wiser.