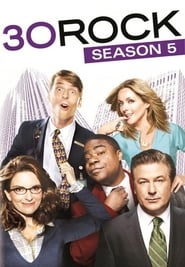 The fifth season of 30 Rock, an American television comedy series on the NBC network in the United States, began airing on September 23, 2010. NBC announced on March 5, 2010 that 30 Rock would be returning for a fifth season in the 2010–2011 television season. Beginning with episode 11, 30 Rock was moved to the 10:00 PM timeslot, but, as a consolation, was renewed earlier than the other NBC sitcoms. During this time, Tracy Morgan underwent an emergency operation, causing his character to be written out for several episodes. On July 31, 2010, NBC announced that an episode of 30 Rock’s fifth season would be filmed and broadcast live, twice, on the evening of October 14, 2010. The two separate recordings resulted in a live telecast of the episode to American viewers in both the West and East Coast. The episode was a ratings success and was met with very positive reviews. The season also featured the show’s 100th episode, which aired as a one-hour episode.