Mackenzie decides to assign the group a task and then they are free to go home. However, he forces Quinn to stay with him in his caravan. Mackenzie admits that although he is rich enough, he cannot let the €3,000,000 go because of his reputation. The rest are instructed to pick up supplies to produce ecstasy from a cabana and send them to the abadnoned village. Enroute Baxter returns for Carmen. After making the ecstasy, Carman exits the van to wait for Baxter later. They deliver the ecstasy in a nightclub. After they receive payment, they drive back to Mackenzie’s caravan in time to save Quinn. It is revealed that Mackenzie made them produce fake tablets to fool the nightclub owners. Mackenzie lets them go, and as an extra, allows them to keep the €5,000,000 payment, and lets them go, instructing them to board a cargo container, which will take them back to the mainland via ferry. However, this does mean Baxter has to leave Carmen behind, though he intends to contact her when they arrive in Barcelona. However, they find that Mackenzie tricked them; the ferry arrives in Morocco. 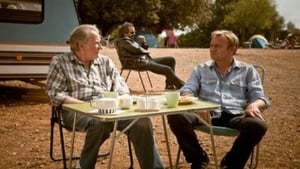