Power to the People

In the last of his Big Ideas journeys, James May sets off to find smarter, brighter and bolder ways of powering the planet for future generations. James begins his journey by looking at the energy produced by the sun. In a unique experiment, he tries a solar-powered car. It might have raced thousands of miles across the Australian desert – but just how far will a solar car travel in Guildford at night? In Seville, James visits the world’s first solar power station. This extraordinary cathedral of lights towers over the Spanish countryside, but for all its high tech glory, James discovers a curiously low tech Achilles’ heel. Continuing his journey to the US, James encounters a group of dedicated aerospace engineers who are planning to make a lift that will reach 20,000 miles into the skies. Their idea is to build a power station in space. James watches enthralled as they take their first tentative steps towards their goal – and a crack at a $2million [£1million] prize. While in Holland, James meets the first Dutchman who once travelled into space. This man has now put away his rockets and spacesuit, swapping them instead for kites in an attempt to harvest the powerful winds of a high-altitude jetstream. And finally, James heads off into the deserts of New Mexico to seek out some modern-day alchemists. This group of scientists are hoping to conjure petrol out of thin air, with the help of only a few mirrors. 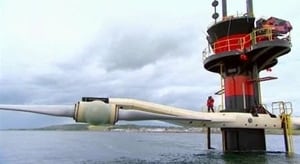