“Brooklyn Without Limits” is the seventh episode of the fifth season of the American television comedy series 30 Rock, and the 87th overall episode of the series. It was written by co-executive producer Ron Weiner and directed by Michael Engler. The episode originally aired on the National Broadcasting Company network in the United States on November 11, 2010. In the episode, Liz Lemon finds a pair of jeans that make her look sexy, but which leave her with an unexpected moral dilemma; Jack Donaghy attempts to stop Regina Bookman being elected by endorsing her political rival Steven Austin; and a jealous Jenna Maroney attempts to sabotage the chances of the new Tracy Jordan film winning a Golden Globe Award. 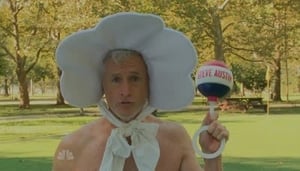