“Operation Righteous Cowboy Lightning” is the twelfth episode of the fifth season of the American television comedy series 30 Rock. It was written by executive producer Robert Carlock. The director of this episode was Beth McCarthy-Miller. It originally aired on the National Broadcasting Company in the United States on January 27, 2011. Guest stars in this episode include Robert De Niro, Lester Holt, Sherri Shepherd, and Dean Winters. In the episode, Jack Donaghy decides to pre-tape a celebrity benefit for a natural disaster, but his plan goes terribly wrong. Meanwhile, Tracy Jordan continues to drive Liz Lemon crazy with his irresponsibility. However, when a reality show camera crew starts to follow Tracy around, Liz tries to use it to her advantage. “Operation Righteous Cowboy Lightning” was universally well received and praised by television critics. According to Nielsen Media Research, the episode was watched by 4.922 million households during its original broadcast, and received a 2.4 rating/7 share among viewers in the 18–49 demographic. 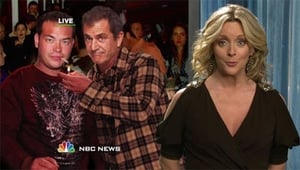