“Mrs. Donaghy” is the eleventh episode of the fifth season of the American television comedy series 30 Rock, and the 91st overall episode of the series. It was written by co-executive producer Jack Burditt and directed by Tricia Brock. The episode originally aired on the National Broadcasting Company network in the United States on January 20, 2011. Guest stars in this episode include Meng Ai, Jean Brassard, Todd Buonopane, Tituss Burgess, Cheyenne Jackson, Chris Parnell and Sherri Shepherd. In the episode, the fictitious show The Girlie Show with Tracy Jordan staff are affected by budget cuts at NBC. Meanwhile, Jack Donaghy married his girlfriend Avery Jessup but following the wedding he learns that the minister did not marry the two of them. At the same time, TGS star Jenna Maroney shares a dressing room with her co-star Danny Baker, and Tracy Jordan has a health scare. Before the airing, NBC moved the program to a new timeslot at 10:00 p.m., moving it from its 8:30 p.m. slot that began in the beginning of the fifth season. This episode of 30 Rock was generally, though not universally, well received among television critics. According to Nielsen Media Research, “Mrs. Donaghy” was watched by 5.338 million households during its original broadcast, and received a 2.7 rating/7 share among viewers in the 18–49 demographic. 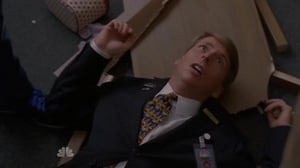